In Young Hollywood, Episode 11 – The Cover Up, Adrian, Jayne and Robin, put together a plan to keep Adriana’s secret safe. Meanwhile, Robin struggles with the legality of it all.

In Episode 3 – Doctor Uncle, revenge takes a backseat when a tragic accident, puts gifted surgeon, Adrian Banovic at a crossroad. His goal is to protect his niece’s reputation at any cost.

In Episode 9 – The Reveal, Adrian breaks the news to his brother, Robin about what really happened the night of Adriana’s accident. 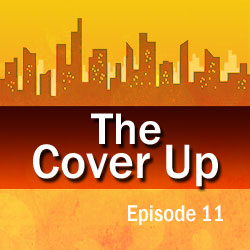 “What’s the matter, Daddy? Are you mad at me because I’m not getting better fast enough?” Adriana picked up on her father’s solemn mood the minute he walked in.

“Honey, don’t force yourself. Your memory will return when the time is right. I want to make everything perfect for you when you come home in a few days.”

“How’s the patient doing?” Adrian entered and nodded at his brother. “Any headaches? Pain behind the eyes?”

“Did you hear? You’ll be going home soon. Think you can handle that?”

Adriana looked at her father, nodded and smiled.

“Your skin coloration is coming back nicely. Have you been using the special glasses I gave you when they take you out?”

“You’ll have to keep wearing them anytime you go outside and if it is too bright around the house.”

“I’ll come by the house and check on you.”

“You don’t have too, I’ll be fine.” Adriana put on a brave face.

The truth was that she was scared to go home. The people at the hospital were familiar to her but outside, except for her father and Warren, everyone else were strangers.

“You don’t have a choice. Your body parts might fall off when you leave, who’s gonna put them back on?” Adrian teased. “Get some sleep, your dad and I can talk outside.”

“I’ll be right back, okay, honey?” Robin kissed her head and tucked the covers around her.

Adrian lead Robin to the vacant room next to Adriana’s.

“How are you holding up?”

“How am I supposed to hold up? My daughter is responsible for taking the life of another person.” Robin snapped.

“It was an accident.” Adrian assured him.

“You’re covering for her, you could lose your license.”

“That’s the easy part. I’d give up my life to keep her safe.”

“I appreciate that, Adrian.”

Jayne Banovic entered the room, she stood next to her husband.

“We appreciate it.” She corrected.

“I had to tell her.” Robin answered.

“Jayne, I didn’t want to make things worse for you.” Adrian addressed his sister-in-law.

“We’re family, and family stick together.” Jayne said firmly. “We need to get her home, soon.”

“What about the Kincaids? What if they want an investigation? Their daughter is dead because of mine.” Robin ran his hands through his hair.

“This accident was their fault. Who buys a Hummer for their kid before they get their license?” Jayne stated.

“The Kincaids don’t want an investigation. They think their kid was driving and they feel bad because of Adriana’s situation. We can work with that.” Adrian pointed out.

“I can’t believe you two are acting like she spilled coffee on someone’s carpet.” Robin looked from his wife to his brother.

“What about witnesses?” Jayne directed her question to Adrian, ignoring her husband.

“My guys cleaned the scene before the ambulance arrived, and we have the traffic cam tape.” He answered.

“What about the other kids at the rave? Did anyone see her leave? Did they see her get behind the wheel of the Hummer?” Jayne questioned. She was all business.

“It’s a rave, chances are they were all high as kites.” Adrian confirmed.

“I tried to protect her without stifling her and this is what happened! She ends up high at a rave, driving illegally and killing someone. If you hadn’t been there… if you weren’t there, Adrian. If she had hit another vehicle…” Robin paced.

“You can’t think like that. It happened this way and we were lucky.” Adrian put a hand on his brother’s shoulder.

“How soon can you get her out of here?” Jayne asked, interrupting the brothers.

“I’ll start on the paperwork now.” Adrian headed for the door.

“Adrian.” Jayne stopped him. “Thank you.”

“We’re family.” He left and closed the door behind him.